So I got my G4 finally, and had a couple of 7+ sensors left. I decided to conduct science and wear both of them and see if either was more accurate or any general conclusions I could make about the new G4 or the old 7+.

So I put them both on opposite sides of my stomach. The G4 was taller, but with the same footprint (more or less) as the 7+. I used an alcohol wipe to prep my skin and clean off the sensor before I put them in, and then stuck an IV3000 with a hole cut out over both.

I know that the new G4 sensor is bigger because it has more of the "brains" in it, but it's annoying and I think that they could have left that stuff in the receiver and just redesigned it (make it square instead of annoying egg).


I would have taken more pictures but I lost interest in constantly comparing the graphs. Suffice to say they seem to be identical in technology, except that one is presented more appealingly.

7+ has a shorter battery life, probably because of the insane backlight and the length of time it stays on. The light goes out on the G4 faster, but not too fast to read and comprehend it. Both have really annoying LOW <55 alarms, but the G4 is more annoying. I kept them both solely on vibrate, and it seems like there's more of a pattern to the G4's vibrations than the 7+'s.

G4 has a microUSB port! Except there's a cheapo slidy bit to prevent dirt and stuff from getting in it that will be the first thing to break - they should have done a rubber cover thing like on most digital cameras.

In terms of sensor life, I actually had to rip them both out after 4 days because of itchiness and adhesive failure. The G4 gave me a 67 or something when actually my BG was 144 or so. 7+ was right, and I noticed that the adhesive was going on the G4 sensor - I think the wire was out. I took it off because it was really itchy anyway and then took out the 7+ an hour later.

I think that's more of a result of a) stomach is the worst place you could put them and b) I sleep on my stomach etc so a lot of rubbing etc to the sensors than it's sucky adhesive. I haven't yet done an arm G4 but I hope they will be similar to my experiences with the 7+ which is that they last nearly forever (until the sensor wire conks out).
Posted by Jackie at 3:37 PM 2 comments:

I did a dumb thing; writing papers about diabetes

So last night (technically the night before last as it is now the 25th) I was low before bed. I ate some fruit snacks, ate more fruit snacks, then decided to suspend my pump to stave off the low.

I fell asleep and the alarm clearly did not wake me up... Nor did my DexCom (although I can't blame it, it fell on the floor). I woke up when my phone alarm went off, 6:15, and grabbed my Dex off the floor. It said HIGH. I said, it's just messed up because it fell off the bed, whatever. I went to the bathroom and decided to look at my pump (don't remember why). Lo and behold, it was suspended. The puzzle pieces fell into place and I gave myself 8 units then and there.

Went back to my room, tested, 398 or summat, added the extra correction on, continued to get ready to be a productive member of society, and drank a bunch of water. Crawled back into bed until 7:00 when I headed to work... We played ping-pong for half an hour, and sleep-deprived high [bg] me is not very good at that. Oddly enough I was asymptomatic until I realized what I'd done, and only then did I begin to feel like crap.

Work = summer college fun awesome camp for high school students. I'm a residence counselor, like an RA for the students. It's pretty cool and I get to be a total geek about my favorite geeky things and people actually enjoy it. Also I stay up late sometimes and get paid for it, which is what I'm doing right now (no I'm not voluntarily writing a blog post at almost 1 am).

And I am writing this post instead of working on a paper I am supposed to be writing about stereotypes and diabetes. But now I will get on with it and go do that.
Posted by Jackie at 12:43 AM 3 comments:

Oh hi there. Not like I haven't posted in months, or anything, but I haven't. I've had this amazing thing called college to deal with. This coming week is finals week and then I'll be done for a couple of months before coming back up here to be an RA for the summer camps they have. I'm also taking a couple of classes so I won't be bored out of my mind.

Still waiting on the Vibe, although it's getting closer.

Endo appointment shortly after I get home; hopefully a1c will still be in the low 7s.  My cholesterol, on the other hand, will probably be awful...

Also I got my Gold Award finally, so I can now say I've earned the highest award in Girl Scouts, and my diabetes helped. :P

Bring on the summer!
Posted by Jackie at 4:10 PM No comments:

I think this is a nifty little thing, although not even close to my life on a daily basis, but it should help you get a little bit of an understanding of the crap we do on a daily basis...

Throughout November, we're asking people to better appreciate what people with type 1 diabetes (T1D) experience every day, every hour by taking part in a unique mobile-based challenge: T1D for a Day.
When you sign up for the T1D for a Day text challenge, you agree to receive as many as 24 text messages over a 24-hour period that simulate the constant blood sugar testing, insulin injections, and dietary decisions that confront people with T1D.
While no virtual campaign can recreate the many needles required or the physical and financial tolls of this serious disease, T1D for a Day seeks to deepen understanding of the many heroic steps our friends and loved ones with T1D take each day.
Please sign up for the T1D for a Day challenge now!
Text T1D4ADAY to 63566. You will receive a confirmation text that completes your registration.

Alternatively you could send me your phone number and I'll send you a text every time I do something diabetes related... Yeah, don't do that. I'd need to send you hundreds of texts...
Posted by Jackie at 9:41 AM No comments:

Wordless Tuesday, or Not. 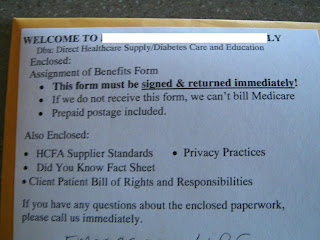 I don't know about you, but you can't bill Medicare anyway... I don't have it. Don't be THAT supplier. Oh wait, you already are.

Dumb supplier did send me my cartridges, but also 5 little zippy bags of 10 IV Prep wipes each (wtf?) and this crap envelope filled with more crap. I don't care right now, much less do I have the slightest idea what on earth this is about, as I've never seen it or heard of it before in my life and I've been through four or five suppliers.

So I need to order more cartridges. Not sets, not strips, just cartridges. My mom calls the new med supplier, because last month the insurance company told us we couldn't order straight from Animas anymore, and we needed to use this supplier. She called last month and set everything up so she could just call and order what I needed. [Note - this is the third time this year we've had to change suppliers, same insurance company though.]

Of course it can't be that simple. They ask for everything they asked for before and tell us they can't ship us the order, that we need the doctor's office to send something in, they need money from us (wtf? never had that before), and that they can't ship us test strips. We don't want freaking test strips [switched scrip to local pharm, getting them for $5 a month!], we know you can't give us them. Then she tells us she can ship us Insets. I don't want those either, I have a freaking ton of them. All I need are cartridges. The woman didn't know the difference between the two, because of course they also sell all the crap that medical suppliers do and they don't attempt to know what they're shipping to people.

Then they tell us they can only ship 4 boxes for a three month supply. 40 cartridges are not enough for me, as it's about 100u a day, and the cartridges are only 200u. Three months (90 days) should be 45 cartridges. I know you can't ship half a box, so ship me an extra box, dangit!

Add to the fact that the woman said they didn't have Opsite Flexifix tape when I'm almost positive they did. My mom even gave her the freaking item number! [I <3 Amazon, just bought some off there, although it was more expensive obviously.]

So I have no idea when I'll get my cartridges. I have about ten left I think, but I leave for college in ten days... Everything else is taken care of, getting my normal scrips filled on Monday so I'll go up north with 8 bottles of insulin for some inane reason. Bought about half my books, bookstore doesn't have the other ones for some reason. I went and got new glasses and they should be in next week so I can pick those up yay.
Posted by Jackie at 8:08 PM 2 comments:

I don't remember Kerri's post but you know what I'm talking about. I feel like absolute garbage. Sure my wisdom teeth are gone, but now I feel like puking my guts up and have an awful headache. I don't want any of this, it freaking sucks. My blood sugar's been in the high 300s since I got up. Rage bolusing is doing nothing and Dex decided it was a good time to conk out completely.

It's the amoxycillin doing this to me, but I can't fix it unless I don't take it. I hate this.

Any suggestions?
Posted by Jackie at 10:43 AM No comments:

Jackie
Michigan, United States
I'm a college student with type 1 diabetes. Hopefully this blog will chronicle my journey, or at least give you some entertainment. I am not a doctor so this isn't medical advice. YDMV. I like hockey, the bari sax, sleeping, chocolate, and most things people like me like. :P